Showing posts from October, 2010
Show All

October 31, 2010
On Friday we met with all the Bishops of this Province, which was a really good experience. The Archbishop, The Most Revd Carlos Touché-Porter, chaired the meeting the night before with the young people and translated for us. He expressed his gratitude that we had chosen Mexico for our meeting. He commented that several groups  had cancelled their time here due to the media reports about violence. He also said that since they had become and independent province in 1995 they had experienced a very real isolation. (Until that point they had been part of the TEC) The sentiment was echoed by the bishops on the Friday morning. They were all genuinely interested in what the Network does and how it could help their youth ministry. We then met with the Provincial Secretary who was really supportive and offered to help us make contact with several provinces in South America to develop our links with them.
Some of us went out that night. I had an Indio beer in a glass with salt around the rim, a…
Post a comment
Read more 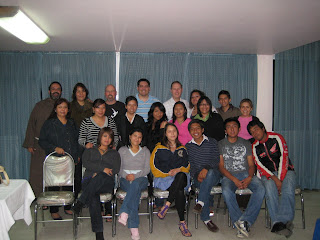 On Thursday Douglas made us review what IAYN is doing and as a result we decided to develop a focus.
We discovered quite by accident (thanks God for the internet) while looking for something else that this year, right now is the UN International Year of Youth. So to help Anglican young people engage with this year, and to pick up the theme that has been a focus of several of the other Anglican Networks, that of eradicating gender based violence.
We began working on developing a resource called Ending Violence, which is basically one of the theological reflection processes I learnt as part of the Masters (the paper I did in 2004). On Thursday night we met with young people and young adults from Mexico City, all of whom are part of “the Happening” the youth version of Cursillo.  When Sally-Sue told them about this they were so enthusiastic. I was really taken by surprise. It helped me realise how institutional I can be. I kept thinking that the UN year “our year our voice” should/could b…
Post a comment
Read more

October 24, 2010
I am stting in Auckland airport waiting to board my place for LAX and then Mexico City, for an International Anglican Youth Network Steering Commitee meeting. I am hoping to be able to put up the odd (maybe really odd) post over the next two weeks about what we are talking about and what we hope to do.

Once our meeting finishes we will be staying on for the day of the dead celebrations. It should be lots of fun.
Post a comment
Read more

October 24, 2010
This morning I happened to watch a TV programme on the Crusades. The presenter was a Muslim, which was interesting given the series is about the history of Christianity.
He and those he interviewed made a few really interesting points. They described just how brutal and violent the crusaders were. They butchered their way around the Middle East, killing men, women and children. On some occasions cooking children on spits and eating them (that was recorded by the crusaders themselves). Awful stuff.
The first thing they noted was like Muslim extremists today, there was a clear link between this butchery and their faith. The Pope had granted indulgences for the taking of Jerusalem, and these knights saw it as their religious duty to kill as many people as possible for their faith, for Christ.  They entered Holy Sepulchre covered in the blood on civilians, and saw that as part of what they were there for.
Their second point is that the people of the Middle East remember, and the people of t…
Post a comment
Read more
More posts