Showing posts from September, 2007
Show All

September 15, 2007
Just thought I would check in. Had real fun trying to check in on Wednesday. Amongst the bits of paper I photocopied to leave with Bonnie and then left on my desk was my eticket out of the USA. And I needed that to get into the USA. And the Air NZ desk was shut till about when I flew out. Air India would not accept my itinerary. In the end I got United Airlines to print me off a copy of my eticket. Air India kept telling me it was supposed to be a paper ticket because it did not say eticket on the computer, and I kept saying they don't issue paper tickets. I was glad to get on the plane, which was not very full, so I had lots of room, even if it wasn’t the nicest or cleanest of planes. I put my hand in the pocket in front of me and got stuff on it. The food was not so great. Not even curry!!!I don't want to know what!!! But we were well looked after. After I arrived on Wednesday I was taken out for dinner at a seafood place at the crab shanty on the cost. I had crab!!! With
Post a Comment
Read more

Sunday and Monday in England:

September 12, 2007
Sunday I was really tired, and in the end went to lunch with Janet, and then had a go at my sermon while watching rugby on TV. Not a good combination. Monday was far more energetic. I went into London, and went to Covent Gardens, which was lots of fun. Lots of shops and market stall, good food, and great buskers. I thin went to the British Museum. I was hoping to see the terracotta soldiers, but that display starts Thursday. Never mind. I wondered around for about 2 ½ hours. Highlights for me were seeing the Assyrian material. I have never seen that kind of stuff before, and it was quite moving. I really enjoyed learning about the history of Christianity in Nubia (?) now part of Sudan, which was Christian until the 1500’s. and some of the history of Islamic world. There are some photos up on the facebook site Had an excellent dinner out with Rod and Pam. It was great to see them again. Today chilling with Janet, before heading off to New York.
Post a Comment
Read more 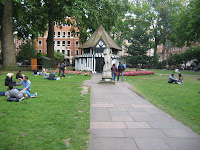 Photos of John in England 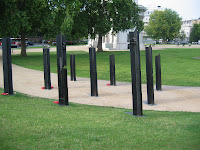 On Monday I went to the new NZ war memorial, which is next to the Wellington Memorial near Hyde Park. It is a really interesting piece. From one point of view they look like poles blown over in the wind. At another, a series of white crosses, and up close they become really interesting sculptures.
Post a Comment
Read more 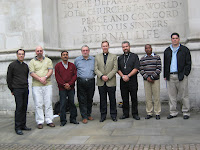 The meeting of both the Steering Group and the full group of the International Anglican You, h Network are now over. I think they both went really really well, even if I wasn’t in charge of either. Our meeting of the Steering Group did a good job of planning out our time, and working out who was in charge of which sessions. We had a clear vision and worked well to reach it. People are rightly going to ask was it worth the money. And for me the answer is yes. I had lunch with Evans from the Sudan. He is only just appointed as the Provincial Youth Officer, having done the work as a volunteer over recent years, especially through the war. He now knows he is part of a network that knows him and cares for him, prays for him. His church still uses 1662, so to participate in liturgies written by young people was just amazing. He wants to go home and talk to his bishops about that and start working with young people and youth leaders preparing youth written liturgies. He has had time to talk t
Post a Comment
Read more

September 02, 2007
I have arrived. I went to the gym before I left, and hurt my leg. It is still not good, and at times it as hard getting in and out of the seat, but as long as I kept it straightish I was ok. We are staying very near Hyde Park, so Michael Tamihere and I went for a very slow walk around it for two hours, which was nice. We found Priness Dianna's "fountain" which is really like a circular stream. Very poignant on the 10th anniversary of her death. All in all it was a nice way to spend an afternoon. We got back to Lancanter House, and our IAYN group was all here. So we have been working away at our agenda, and it all looks good. You can see what we are on about by clicking on the link Where we are is really a german youth hostel, so there are lots of germans on staff. It is strange being in England with the staff struggling with English. I need to go read the draft Anglican Covenant as I am leading a discussion on this Peace
Post a Comment
Read more
More posts