It’s all in the Tense

You can listen to this sermon here

What I want to happen:

This story we have just heard from Matthews gospel is reasonably well known
Similar story in Luke – probably better known
But I think it is a really hard story
Wonder what we understand by it
Invite to turn to your neighbour
What do you think this story is all about?

a.     As we read this story,
-         we need to keep in mind everything Jesus has lived and taught about Kingdom of Heaven/reign of God up to this point
-         Especially in the Beatitudes and Sermon on the Mount
b. need to be very careful to NOT always see king/landowner in the story as God
- lead to some really bad ideas about God
c. We also need to remember that this is at the end of a conversation between
-         Jesus
-         and the Chief Priests and Jerusalem elite
o   (which Matthew includes the Pharisees later on)
è Jesus is in the temple
è Chief Priests and Jerusalem elite come to him and ask
“By what authority are you doing ALL these things,
-         teaching,
-         healing,
-         forgiving sins,
-         eating with sinners etc…,
-         entering Jerusalem on a donkey
-         overturning money changers tables –
ð ALL those things and more.
and who gave you this authority?”
In reply Jesus asked what they thought about John’s baptism
which was essentially asking
“By what authority did John baptise, and who gave him this authority?”
unwilling to answer because they feared the crowd
so he says – and I am not going to answer your question
d. and then he tells three stories
which highlights their lack of real authority
-         their lack of God given authority
-         Yes, they have lots of power
o   Which they will use to ensure Jesus in executed
-         But no God given authority

todays was the third of those stories
Usually read them as three separate unrelated stories
but I think that understand them we have to read them together
each one builds on the previous story
a. the first was about 2 sons – asked to help on the farm
one says no and then does
one says yes and then doesn’t
to which Jesus asks
31Which of the two did the will of his father?”
They said, “The first.”
Jesus said to them, “Truly I tell you, the tax collectors and the prostitutes are going into the kingdom of God ahead of you.”
you are like the second son – you say the right things,
-         but you do not act on what you say
-         your actions betray you
b. so to show what he means he uses Isaiah 5
- and tells the story about a man who obtains a vineyard and puts in tenants
this is not a make believe story
he is talking to landowners, and people around listening are once landowners who are now tenants and say labourers
Chief Priests and leading families of Jerusalem had become huge landowners – acquiring land from families unable pay Roman and temple tax
in Jesus story – about landowners and tenants
when time for the rent to be paid sends his slaves to collect
tenants don’t want to pay so beat up, stone or kill slaves
sends more slaves and same thing happens
sends his son
they kill the son
Jesus then asks landowners what the land owner will do when he arrives
they answer – “He will put those wretches to a miserable death, and lease the vineyard to other tenants who will give him the produce at the harvest time.”
“By what authority are you doing these things, and who gave you this authority?”
he then talks about the building block that was rejected now being the cornerstone that people like chief priests and leading families will stumble on
c. tells third story
- this story is not stand alone
- it is told in response to their answer 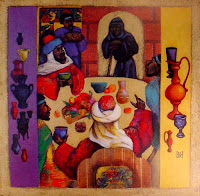 Story about King who thrown a party for son’s wedding
Lot honour at stake in this
-         Scale of party
-         Who is invited
-         Who comes
Not coming when time arrives is huge insult
Loss honour for king
Who kills them all.
Who does that sound like
-         God as described by Matthew in Jesus life
-         God of Beatitudes
-         Longs for reign of heaven
o   a world where the most important people are:
§  the poor in spirit,
§  those who mourn,
§  the meek,
§  those who hunger and thirst for God’s justice,
§  the pure in heart,
§  the merciful,
§  the peacemakers,
§  those who are persecuted for the sake of God’s justice,
-         Reign of God
o   This is a world where all flourish
o   Where the common good is held as paramount
o   A world where the needs of the poor are placed first
o   Where ALL are treated with honour and respect
o   And given what they need to thrive
To me this sounds much more like actions of Chief Priests and Jerusalem elite
Or Herod Great – deeply paranoid
Killed number of own children
-          On hearing new king born in Bethlehem
-          Sent in his troops to kill all boys under 2
Or his sons – also deeply paranoid
Herod Antipas had John Baptist beheaded on whim of daughter
Or Roman emperor
-         Crushed Jewish uprising
-         Destroyed many Jewish cities including Jerusalem
-         Killed or enslaved Jewish population
Is this a story about God?
-         For me – NO!
Or is this a story that critiques how God and the kingdom of heaven is described and lived by people like the chief priests and leading families?
and it comes out of their ending to the story about the vineyard
reveals human origins of their authority
an implies the divine origin of Jesus authority
in answer to their original question

So, what do we do with this story?
Maybe take time reflect on how our picture of God matches what Jesus teaches and lives
Take time reflect on how beatitudes really shape our understanding of what reign of God looks like
Finish with question about end of that story
-         The person who did not wear wedding robe
-         Who just turned up
Not about what person wearing really
But about attitude
Most guests astoundingly grateful to be invited to such an event
-         To have this amount food made available
-         Given such honour
-         Wedding robe is their gratitude
Not the one without wedding robe
Seemed take it all for granted
Like chief priests and Jerusalem elite
Believed they deserved to have whatever they had
In what ways are we like this ungrateful one
In what ways are we like chief priests and Jerusalem elite
And what might we need to let go of to really join the party
Following Jesus images of God Kingdom of Heaven Matthews Gospel Ordinary Time RCL sunday sermon Year A

January 25, 2019
Last week we were invited to taste, feel, smell, hear and see the abundance of grace brought about by the Word of God dwelling among us. And I suggested we are invited to read John’s gospel in that light; as a story of grace upon grace.

This week we are given Luke 4 where Jesus goes home. AS a pious Jew from this pious community, he goes to synagogue on the Sabbath. And as someone who can read – no ordinary carpenter then – he in invited to read from the prophet Isaiah. Luke gives us an amalgam of Isaiah 61: 1-2 and 58:6. In our reading from Luke 4: 14-21 Jesus reveals who he is, what he is doing, and for whom he comes. And in telling this story Luke is giving us the lens through which we might read both his gospel and the book of Acts.
And it is radical stuff. This is not about improving the lot of the poorest of Israel; this is a turning upside down and inside out of all social structures. It is a re-imagining of society and placing a whole new set of priorities at the heart of that.…
Read more

November 21, 2019
We have made it to the end of another church year, and so finish our time in Luke’s Gospel. That means this Sunday is Christ the King or the Reign of Christ Sunday. If I am honest, I really struggle with this title. It’s very male and quite European. I wonder how many of our preconceived ideas about “king” shape how we understand Christ as king, and whether we are able in any way to let the gospels define this for us? Interestingly in our church here in Aotearoa – New Zealand this Sunday is Aotearoa Sunday – where we get to remember the long and hard story of the creation of Te Pihopatanga o Aotearoa. A solemn note to finish the year as we reflect on how our Eurocentric notions of what it means to be Christian have got in our way of living with compassion and generosity among nga iwi o Aotearoa. We have played king, with Christ the king made in our image. In contrast we are offered the image of a crucified king by both Luke and the lectionary writers. The temptation is to jump away from…
Read more

April 11, 2020
This can be listened to hereIt began in God Who is love It began when the Eternal Word Came among us As one of us To remind us that we are made In the image of love
To be honest who knows when it began That part of the story is very hazy And no-one thought it important enough to even report on it.
It began with a carpenter’s son Walking and teaching in the footsteps of John the Baptizer Preaching and healing in Galilee One man Alone But soon people noticed crowds gathered disciples were called It gathered pace Became a movement of sorts
It began with a report A new flu in Wuhan One death Alone And then there were more. We heard of a man A doctor chastened for raising a flag We heard of his death and the news took notice we took notice of events in faraway China as the number of deaths rose and the lock-down began
Those were heady days. He embodied God’s love
Read more