Embracing the humanity of Mary


What I want to say:

What I want to happen:
people to be inspired by strong courageous Mary
to ask what does she offer us this Christmas as we look to the Christ amongst us 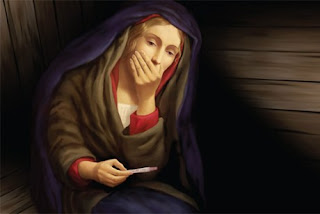 St. Matthews in Auckland in news again for one of their billboards
Personally like this one from last year
what do you think of this?
how do you react?
what does it say to you?
what want to say about it?

talk to your neighbours

some people would say  – heretical
Mary not been worried
simply overjoyed at prospect of her first born
first born who was God’s son
why would she be even remotely worried?
for me, that approach to Mary dehumanises her
described that in blog as plastic Mary
asked what use that was for us
Mary is vehicle for incarnation
God bending down in love to be among us as one of us
one of us
Jesus humanity depends on Mary
If she is this plastic joyful little bunny then have ask
how is she one of us
and how is Jesus one of us
with all our hopes, and fears, doubts
what hope we have in Christ born of a plastic Mary?

Why doesn’t this ring true for me?
being pregnant any age is always filled (understand) with some level apprehension
especially when first one
even more so when young
– no idea what about to happen
level uncertainty and fear involved

excitement yes
joy even
also fear and uncertainty
as young woman
Mary experienced others pregnancy
probably seen women die in childbirth
seen children die
seen how hard pregnancy  is for some people
known there is risk
unless she feels some fear, apprehension, uncertainty about whole venture,
she is hardly one of us
nor will her son be
cultural layers here as well
unmarried – risky venture
abandoned by Joseph and her family
ostracised by rest community
not survive long on her own
killed
fear, apprehension, uncertainty has got to be part of this
this bill board shows that really well
I applaud it as helpful aid understanding and embracing real Mary
through her the incarnation
incarnation we are celebrating this Christmas
God coming among us in all our muck, all our fear, uncertainty, hopes and doubts.
This billboard says lets keep Christmas real.

Why am I talking about this
because today is one day focus on Mary
do so in remarkable story
remarkable if only fact focuses on two women
men kept out story
not often that happens
start with Mary going with haste
interesting detail
not talk about who went with – very important detail (not travel on own)
commentators really don’t know what to do with
maybe she is just getting out of town for while let things simmer down
young pregnant girls used to do not so long ago
travels to Elizabeth
interesting choice
wife Priest
boundary keeper
might not been too happy unmarried pregnant women in his house
as said in pew sheet – Elizabeth almost polar opposite of Mary
unlike Mary who pregnancy brings disgrace
– Elizabeth ends her disgrace
she can now hold her head up in community
(unlike Mary who fled)
older, and has been waiting for this day for long time
Mary is almost too young, too busy worrying about other things
what does unite them is that both know their child gift of God
I think that is what leads Mary to go there
both know child will play an important role life people God
filled with wonder,
and worry about that
We are told that when Mary arrives Elizabeth greets her
and blesses her and her child
how does she know?
gossip spread that fast?
result of being filled with Holy Spirit

Mary’s incredible response,
her song (which I guess means she sang it)
which we know as Magnificat - sung at evensong hundreds years
well known
beautiful words of BCP
maybe fact it is so well known is a problem
maybe we miss the point because it is so well known
song girl difficult situation
from poor village
in not great area
in a land under occupation
longs like all people in this situation for the day when occupation will end
longs for grand days when God’s justice and peace be restored
based on song Hannah – recited a few weeks ago
just like hers
more than just a song of joy at the birth of their firstborn
links what happening to them with the ancient hopes
hopes they are now both certain are being fulfilled
more than just ancient hopes
song proclaiming God doing something new here
just as Samuel redefined who people Israel were
so too will this child Mary is carrying
(hint to let go of your expectations
because God is not confined by our expectations)
Mary sings it in present tense
Mighty One has done great things for me
really?
face of it, Mighty One left you in a difficult situation
has done
not future tense as you would expect
(hint to stop waiting for future event, and to look around for what God is up to now)
Message paraphrases it as….
50 His mercy flows in wave after wave
on those who are in awe before him.
51 He bared his arm and showed his strength,
scattered the bluffing braggarts.
52 He knocked tyrants off their high horses,
pulled victims out of the mud.
53 The starving poor sat down to a banquet;
the callous rich were left out in the cold.
hold those words in your heads for a moment

experience of Irish republicans songs at Irish pub,
British brutality
longs end British rule,
songs some of you here not like
few months later went to students event in St. Louis
Mary’s song set to tune very similar to those heard that night
eye opening moment
realised not song faithful to sing well in church
as I had done so often in Evensong
Rebel Song
we have colonised this song
sanitised this song
turned it into a song sung by sweet sounding choirs in lofty cathedrals
well-fed choirs from good families singing for rich and powerful
really song for poor,
hungry,
powerless,
those pushed to edge of society
Mary is one of them
not well dressed matron from powerful house as so often depicted
this is not a sweet song
really is protest song
hear Janis Joplin signing such song at Woodstock
song of Syrian women sing while trapped and in terror in midst civil war
song Palestinians separated from farms by concrete wall, by Israeli only roads


song people South Sudan sing after decade’s civil war
trying rebuilding lives,
and a new nation
living in fear it will all come to nothing
wonder who else sings this song?
who sings this song in this land?
much more than I ever realised as I sang it all those Sunday nights

so what does this have to say to us at Christmas
I think we have sanitised Christmas as well
become time eating way too much (GUILTY)
occasions spending time with family
getting off on holiday
suspect that Matthew and Luke thought it was about much more than that – important as those things are
as we prepare to welcome the Christ child
where are we being invited to open our eyes
what new thing is God doing around us
what scary, unsettling thing is God giving birth to in us this Christmas?
As we say Mary’s Song
as we prepare for this Christmas, what is God inviting us to?

Being a vicar sunday sermon

Joy in a hard year

This Sunday is Gaudete Sunday – the third Sunday in Advent, with the theme – joy. We get to light our pink candle! And we are invited to ask, where is joy? In this Covid world after this hard year it is a chance to stop and wonder, what brings us joy? How does God bring joy into this world through you? A couple of years ago I talked about some research by Sonja Lyubomirsky quoted in “The Book of Joy - Lasting Happiness in a Changing World” by Dalai Lama, Desmond Tutu and Douglas Abrams. Using this research, they talked about the three ways of being joyful as; the ability to reframe a situation positively; the ability to experience gratitude; and the voice to be kind or generous. Advent is a time when we nurture the seeds of love, hope, joy, and peace that God plants within each of us. It is a time to feed the soil of our soul and allow these seeds to root and grow in our lives. It is surprising how often these three ways of nurturing joy keep coming up from the spiritual traditions
Read more

Created by Annette Cater This has been a tough year, a wilderness year. For some wilderness is a place of fear and death; for some peace and stillness; for others where you go to discover God anew, to know again who we are in God and what is ours to do. Whatever our experience or understanding of wilderness, some good news would be welcome. The writers of Second Isaiah (Isaiah 40-66) offered good news to those who lived in the wilderness in exile. Jerusalem and her temple were gone. They were forsaken by God. But here was good news. What good news for us do we hear in these words? A number of commentators suggest an alternative understanding of the first line of Mark. It is the title, not the first sentence. The whole of Mark is the beginning of THE Good News. Good News shaped by Isaiah. Good News lived by Jesus. We are part of that ongoing Good News. It has been hard to hang on to that this year. We feel like the grass that withers, or those flowers that fade. The world is in chao
Read more